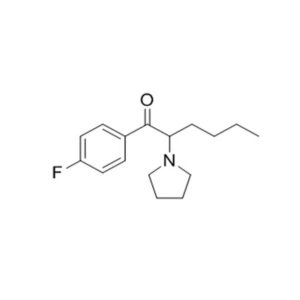 4F-PHP has an IUPAC name of 1-(4-fluorophenyl)-2-(pyrrolidin-1-yl)hexan-1-one, an exact mass of 263.17, and a molecular weight of 263.35. The chemical formula for the new research chemical is C16H22FNO. The chemical is so new that information is not available so we must look at the analogue of 4F-PHP in order to learn more.
4F-PHP(aslo known as 4-fluoro-php) is a synthetic stimulant drug that has been sold online as a designer drug. It is a analogue of α-PVP. This product is intended for forensic and research facilities and is NOT intended for human consumption.Research on compound was published by ACD/Labs’, US Environmental Protection Agency’s EPISuite, and ChemAxon. In the reports by ACD/Labs the chemical has 2 hydrogen acceptors, 0 hydrogen donors, 5 freely rotating bonds, an index of refraction of 1.538, with a surface tension of 40.0±3.0 dyne/cm, a flash point of 119.0±12.5 °C and a boiling point of 340.8±25.0 °C at 760 mmHg.
4F-PHP, also called 1-(4-Fluorophenyl)homopiperazine dihydrochloride and 4-FPHP•2HCl, is one of a family of piperazine derivatives and analogies which are both euphorics and psychedelics, to varying degrees.

4-FPHP and other piperazines have been sold as a recreational drug in New Zealand and other countries under the name ‘Party Pills’ as early as 2003. It has also been detected in brands including ‘Extreme Beans’ and ‘The big Grin’.

These piperazine derivatives function mostly as agonists for the 5-HT1A chemoreceptors, as well as to a lesser degree the 5-HT2C receptors. There is some difference of opinion whether 4-FPHP actually stimulates the release of norepinephrine and serotonin, or merely acts to slow their reuptake, but it is known to interact strongly with those systems.

Many piperazine derivatives are illegal in New Zealand, but 4F-PHP may not yet be listed as one of them. As always, researchers should check with local authorities.